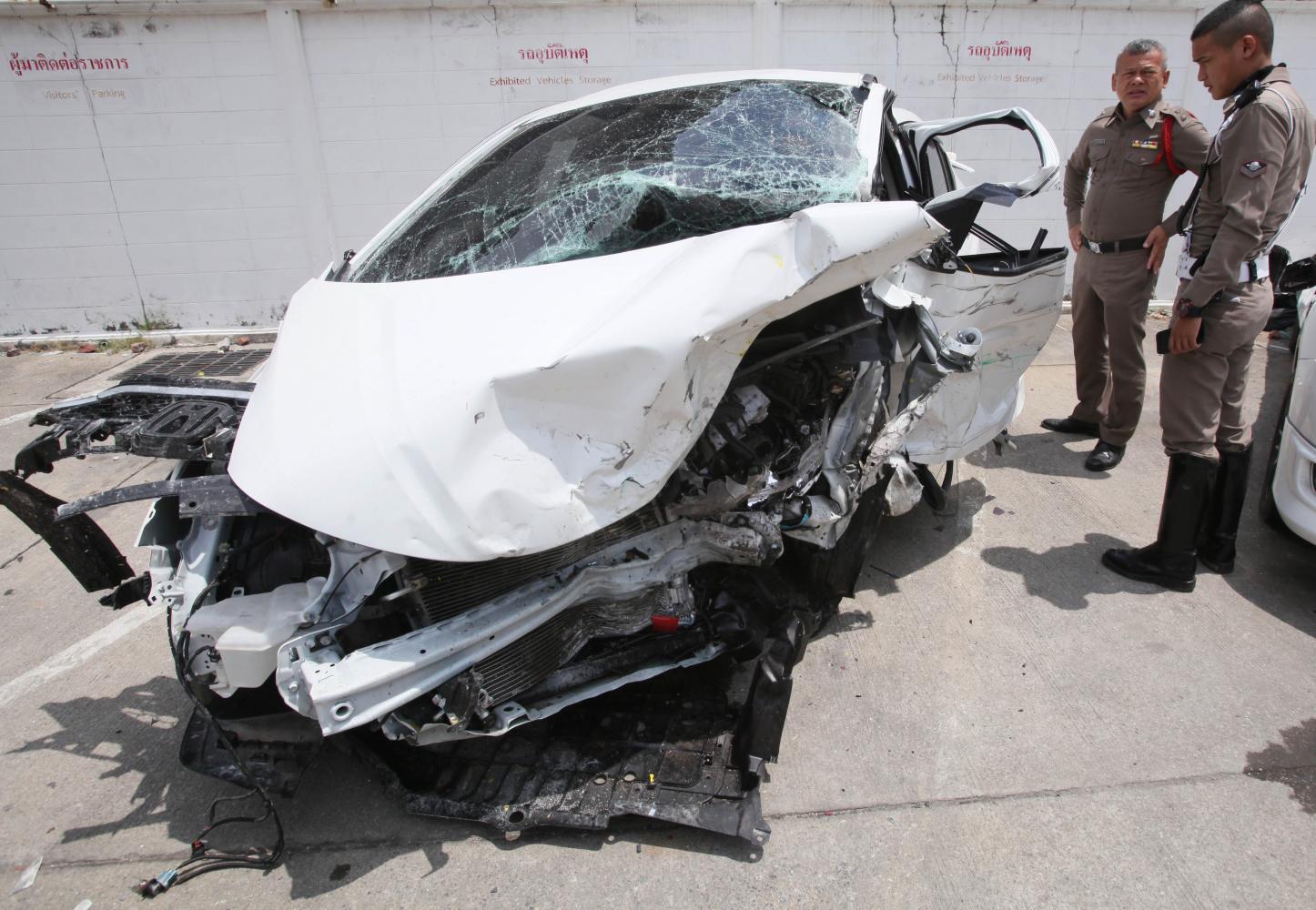 A wrecked car is seen after a crash when a motorist drove against oncoming traffic on the Si Rat expressway in Bangkok on April 15. Apichit Jinakul

Thailand will soon have new traffic laws, based on the more stringent Japanese model, a senior land transport official said recently. Obviously, he was thrilled.

According to deputy permanent secretary for transport Chirute Visalachitra, the agency has been working with its Japanese counterpart and plans to implement the so-called licence point-deduction system, which has successfully instilled driving discipline among Japanese motorists.

The system will be incorporated into the new land transport bill, which merges the 1979 Automobile Act with the 1979 Land Transport Act, and is currently entering the final stages of drafting. The system stipulates tough penalties for violators of traffic laws, including fines of between 1,800 baht and 3,200 baht, and deducts two "points" from those failing to stop at traffic lights, while those who don't stop or slow down to allow pedestrians to cross at zebra crossings will be fined up to 4,000 baht.

There is no question about Mr Chirute's good intentions. The announcement of the new rules appeared to coincide with the road safety week. In fact, the agency deserves some credit for pinpointing the problem. Road accidents are a matter of discipline or a lack thereof. But choosing the Japanese model may be overly ambitious. We all know that Thailand and Japan are a world apart when it comes to discipline in every situation, not just on the road.

This is why the new rule is facing public scepticism -- if not derision -- over whether it would make a difference. Many pointed out that Thailand's traffic laws are good, but it's the law enforcement that is the problem.

Some even asked if we didn't already have that points-deduction system before. Others are curious about whether the authorities have even looked back to find out why the system has gone awry.

I am among those sceptics, thanks to my recent first-hand experience on the road.

During the past Songkran holidays -- the period when the authorities traditionally step up traffic measures in the hope of minimising traffic fatalities -- I encountered quite a few would-be killer drivers who did not care about their own and other people's safety. As major city roads were nearly empty due to the holiday exodus, many drove as if they were on a Formula One circuit.

Some drivers cut aggressively in front of others, and we had to submissively give them the right of way to avoid any headaches. There were also motorcyclists who appeared to be under the influence as they headed off to race somewhere. I could go on about this forever.

In fact, this was the same experience that I had already faced in previous years. Guess what? They got away with such bad driving behaviour -- as always, as no police were to be seen. But even if some officers were there, I doubt that they would do anything.

With officers tolerating such driving behaviour, road fatalities remain high -- holidays or not.

Each day, we helplessly watch motorists who appear to have the luxury of breaking the law, while numerous crashes that we read about in the media belong in a Ripley's Believe Or Not column.

A recent example was a crash earlier this month when a motorist mistakenly drove onto the Bang Pa-in-Nakhon Ratchasima motorway, which is still under construction.

The reason for the misunderstanding is still being investigated, while the driver's relatives are arguing that there were no "under construction" signs along the route.

But even if there were such signs, I doubt that many drivers would really pay attention. Thai motorists have brave hearts and would not give a second thought to using an unfinished road. Some are not so lucky.

Driving on road shoulders, for instance, is still an illegal norm.

It seems that no one who drives on the shoulders remember the story of the innocent people who were killed when some careless drivers who took this special lane rammed into vehicles that were towed to the spot, while awaiting a mechanic.

When there are such tragedies, some officials might mention the need to get tough and "blah blah blah". Not long after the shock of the loss, we simply go back to square one again and again.

It's probably a coincidence that Janepob Veeraporn, the luxury car driver who killed two young innocent people in Ayutthaya in 2016, had his jail term extended earlier this month. The Court of Appeal increased his jail term from 2.5 years to four years. But we will have to see if justice will eventually run its course. It's an open secret that imprisonment is a class issue in this country, and the rich always find their way out of prison.

Allowing such unfit devices or signage on the road somehow shows a lack of sincerity and intention to make the roads in this country safe.

We are under an administration that has enough money to spend on big, expensive toys like 36-billion-baht submarines, but is too poor to replace the dilapidated devices that would make our roads safer and save more lives. Isn't it sad?