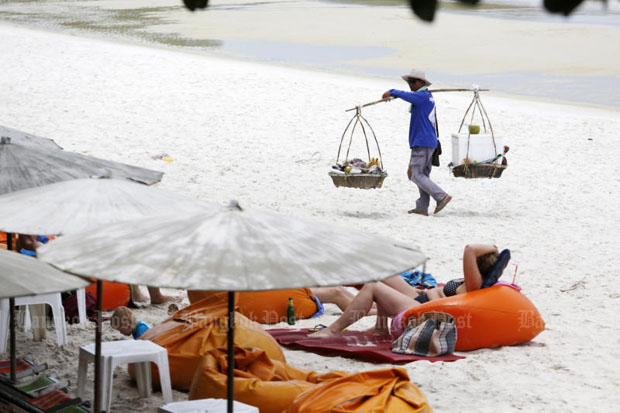 A vendor looks for potential customers on Koh Samet, where national park authorities have confirmed their decision to reject plans for an annual concert. (Photo by Karnjana Ayuwatanachai)

The National Parks Office on Friday confirmed its ban on an annual concert planned for Koh Samet in Rayong province in light of local and environmental concerns.

Nathaphol Ratanaphan, director of the office's marine national parks division, said he supported the decision by Prayoon Phongphan, chief of the Khao Laem Ya-Mu Ko Samet National Park, to reject the "Samed in Love 8" concert. The event had been scheduled for June 3.

Staging the concert would violate the National Parks Act, said Mr Nathaphol, who noted that local residents had asked why outsiders could plan such a large event while their businesses on the island were so strictly regulated. He added that the concert would cause garbage problems on the tourist island where facilities are already severely strained.

Promoters of Samed in Love 8 and tourism operators in Rayong had already sold tickets and prospective concert-goers had reserved accommodations on the island for June 3. The organisers were awaiting the go-ahead from tourism authorities in Rayong and at the Tourism and Sports Ministry.

The concerts had been held on the island each year for the past seven years, but people increasingly have been questioning why national park authorities had approved such a disruptive event.

Residents complained that they earned very little from the concerts despite all the work they had to do to help the organisers. As well, incidents such as brawls were commonplace and concertgoers left behind a big mess that local people had to clean up.