Changing times: Known as Ban Hab Ho Hin, this former rice mill has been redeveloped into a tourist attraction. It is located in the Kao Hong area, one of three sites designated to become special conservation zones.

Songkhla has become known as the major economic hub in the deep South.

The province is abuzz with local economic activity as Malaysians and Singaporeans come to visit or do business in the border province.

But about 30 kilometres away from the business centre is Muang Songkhla, a small municipality located by Songkhla Lake, the largest freshwater lake in the country.

Estimated at over 200 years old, this small town is famous for blending the architectural heritage of the Islamic religion with a Sino-Portuguese style, a genre of Southeast Asia architecture.

Muang Songkhla is included among seven cities that the Thai government wishes to propose to Unesco to list as a World Heritage site.

These names were proposed by the National Committee of Rattanakosin Island and Old Town Conservation, under the Office of Natural Resources and Environmental Policy and Planning (Onep)'s Natural and Cultural Environmental Conservation Division.

The committee was responsible for working out policy and approving development projects in old towns. Onep is the state agency which proposes natural and cultural sites to Unesco.

A master plan for old town preservation is being drafted for each of these cities.

THE PATH TO UNESCO LISTING 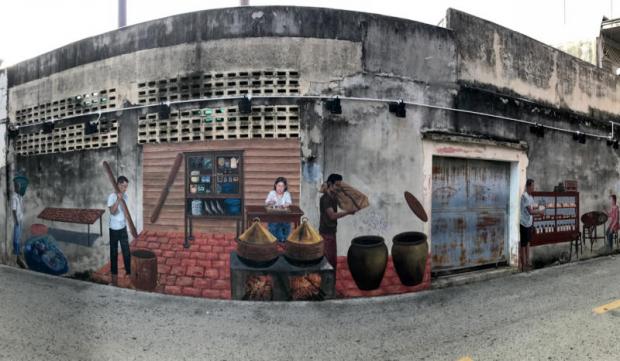 residential heritage: Muang Songhla authorities are preserving these old houses in Kao Hong community as part of the plan to propose the whole town as a Unesco World Heritage site in 2020.

Moves to see Muang Songkhla listed as a Unesco World Heritage site have been ongoing for almost a decade.

After he was killed in a machine gun attack in 2012, his relative, Somsak Tantiseranee, became mayor and carried on the initiative.

The local administration, with the backup of civic groups and academic institutions, has promoted the old town and conservation.

For instance, the local administration and community residents have created street art by painting pictures on old buildings.

Since March last year, the local administration in Muang Songkhla has held public consultations on the process with the aim of seeing the government propose Muang Songkhla as a World Heritage site by 2020. 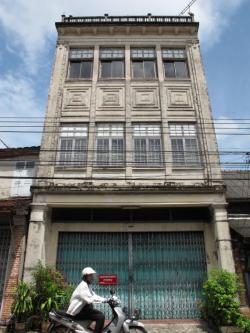 Bilateral collaboration on conservation between Thai and Chinese universities has also become a theme in promoting the city.

These universities are Tsinghua University in Beijing, Zhejiang University and Rajamangala University of Technology Srivijaya (Ruts).

The cooperation is called the "Songkhla old town preservation project of the four educational institutions", according to Thip Srisakulchairak, the architect and facilitator at Arsomsilp Institute of the Arts and head of the project.

The cooperation started three years ago when Her Royal Highness Princess Maha Chakri Sirindhorn attended a fair on architectural and old town preservation at Tsinghua University.

Theerakul Niyom, who had served as a Thai ambassador to China, had returned and was working as an Arsomsilp deputy rector for foreign affairs.

Mr Theerakul came up with the idea of instigating a knowledge exchange project with Tsinghua University.

Some of their past work in Songkhla's old sections had previously been exhibited at Tsinghua University.

Zhejiang University joined in September and sent experts to inspect various sites and collect information, including speaking to residents to begin the process of drafting the preservation project, which will also go through a series of public hearings to be attended by the locals, local administrative bodies and civic groups.

A related forum was held on Oct 7 at Silpakorn University Art Centre for exchanging knowledge and experience in old town conservation between that Thai and Chinese parties in the Songkhla project.

In January next year, both sides will meet again at Tsinghua University to present their ideas developed from the results of the Oct 7 forum.

A SENSE OF PLACE 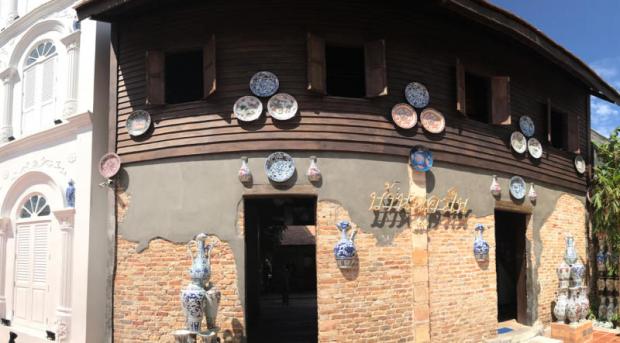 Old Sino-Portuguese style houses are charm and character of Muang Songkhla. Local municipality is preserving these old buildings and plan to propose whole town as Unesco's World Heritage site in 2020.

At this stage, Mr Thip said, it is agreed that three areas of Muang Songkhla should be included in the project.

The first is Nong Chik Road, which was formerly known as the Kao Hong area, a community created by the first group of Chinese to migrate from Fujian and settling in there more than two centuries ago.

The community now consists of about 50 residential half-concrete half-wood buildings, several of which double as shops selling sweets and noodles.

The second is the Phatthalung Road area.

This neighbourhood is known as an early settlement for Muslims who migrated from Indonesia's Java island.

According to some beliefs, Muslim ancestors of the residents here had lived in the Arabian Peninsula before they migrated first to Indonesia and then to Songkhla.

This Muslim enclave consists of about 200 households, mosques and historic buildings.

At night, shops selling tea, coffee and roti are normally open, and always attract a huge crowd of customers.

There are plans to design a physical link between these two neighbourhoods to encourage the sharing of these cultures and to enable visitors to easily pass between both areas.

A landscape redesign will be needed on both roads, while many historic buildings will have to be repaired with their original architectural designs restored, Mr Thip said.

The third is the Songkhla Lake area, which will be developed into a scenic point.

A wharf will be built to replicate the one used in the past by sea travellers. 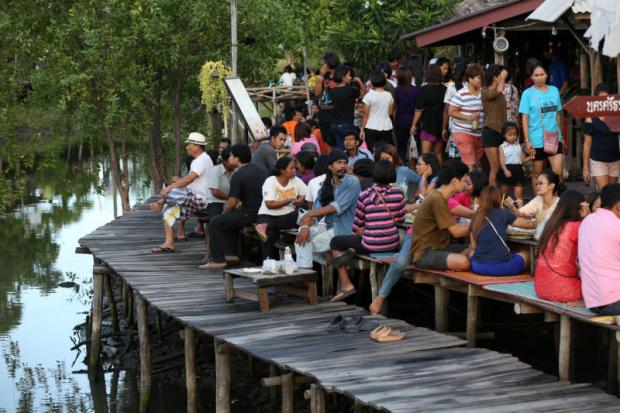 Hub of commerce: Muang Songkhla once served as commercial pier. Now, the site has become a quiet and peaceful residential town.

Luo De Yin, an associate professor at Tsinghua University, said that from his experience in preserving old towns, the key to success consists of two major parts -- support from the government and awareness among the locals about the value of their community.

"Renovation of old houses, for instance, should not only blend well with the community's historic architectural designs, but also provide them with real convenience in living inside those buildings," Mr Luo said.

He Yong, a professor with Department of Architecture of Zhejiang University said: "It's important to begin raising awareness among locals about the importance of their historic community.

Muang Songkhla has been over two centuries old, to say the least. Old picture

"That's because they now live in a modern world and may not really see the old neighbourhood as important to them."

In his previous old town preservation projects in Zhejiang, Prof Yong said he had to demonstrate to locals how they could benefit from keeping old buildings in their community.

His move proved successful in inspiring a number of locals who continued do the same with other buildings in the area.

This is his first time taking part in an old town preservation project in Thailand and Prof Yong said he found Muang Songkhla very interesting.

The more he learned about the value of Muang Songkhla's multicultural heritage, the more determined he became to work together with the various ethnicities in the area to seek to have the city listed as a Unesco World Heritage site, Prof Yong said.

"For the sake of preservation, it's very important for young people to learn about the history of their community and see the value of it," he said.

Most residents of many old towns are old people, while the young people in those families have moved to work and live in big cities, he said.

Jaray Suwannachart, vice-president for research and academic service of the Ruts, described the Thai-Chinese cooperation as a "spiritual relationship" between Thai and Chinese people.

More international partners will be encouraged to join Muang Songkhla's efforts to earn a Unesco World Heritage site title by 2020, he said.

Only less than an hour from the business centre Hat Yai, the smaller and more peaceful Muang Songkhla aspires to become a Unesco World Heritage site. 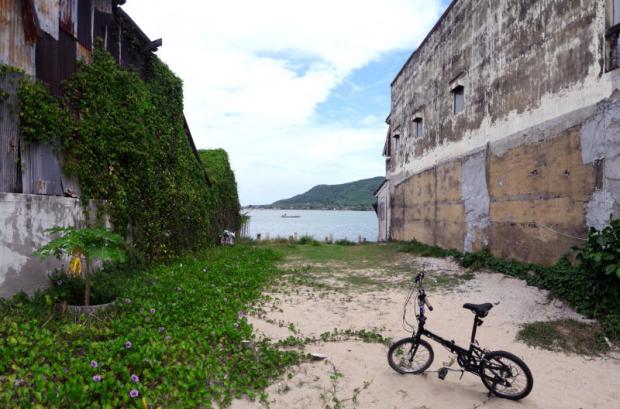 Hub of commerce: Muang Songkhla once served as commercial pier. Now, the site has become a quiet and peaceful residential town. 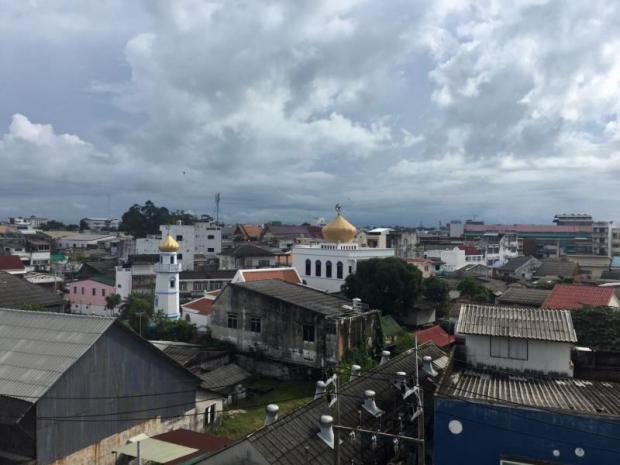 Ban Bon Mosque, in Phattalung Community, is one of three special conservation sites. The community tells the Islamic root of the town. 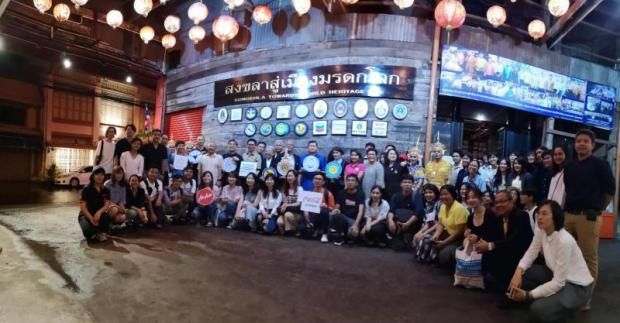