First-time visitors to the northern province of Phayao should be sure to check out the provincial town and, in particular, the famous namesake lake on which it stands. For repeat visitors, however, I suggest exploring the northeastern part of the province, which is made up of Chiang Kham, Phu Sang and Pong districts. Unless, you have plenty of time to spend , don't bother going back to the lake. 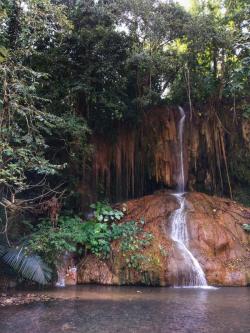 Like Namtok Ron in Krabi, Phu Sang Waterfall boasts a soothing flow of warm water. Although the temperatures here are not as high as those of the southern waterfall, the falls here are a lot higher. The site is part of Phu Sang National Park (tel.093-293-5099 and 054-070-205) so food outlets, restrooms and other basic facilities are available. There is also a nature study trail which allows you to reach the top of the waterfall and the warm stream that feeds it.

Why not? Kwan Phayao, despite its iconic status, is basically no different from any other large reservoir. On the other hand, the three aforementioned districts are blessed with attractions not commonly found elsewhere in the Kingdom.

Take the magnificent view shown in the main picture, for example. It's the kind of sight I never get bored of. Phayao isn't the most accessible province. You can't get there by plane or train. If you're travelling from Bangkok, it takes 11 hours on the road. If I travelled all the way to Phayao but didn't take the opportunity to once again feast my eyes on such a scene, I would never forgive myself.

Another rare gem is the Thai Lue communities in Chiang Kham. Members of this ethnic group live in a few districts in the North, but those in Chiang Kham are among the most active in conserving their traditional way of life. It's a great place to learn about Thai Lue culture and art, which can be seen in their homes, places of worship and traditional costumes.

Visitors will note the remarkable welcome they get from locals. During a recent running event, many families living along the route put tables in front of their houses to offer drinks, fruit and snacks to the runners passing by. The organisers didn't even need to provide any mobile toilets since virtually every household was happy to let the runners use the facilities in their houses.

Should anyone planning to return to Phayao for a third or fourth visit ask me for suggestions on where to go and what to do, I might suggest they head to places they haven't been before, but I would still recommend that on the same trip, if possible, they revisit these three northeastern districts, too. 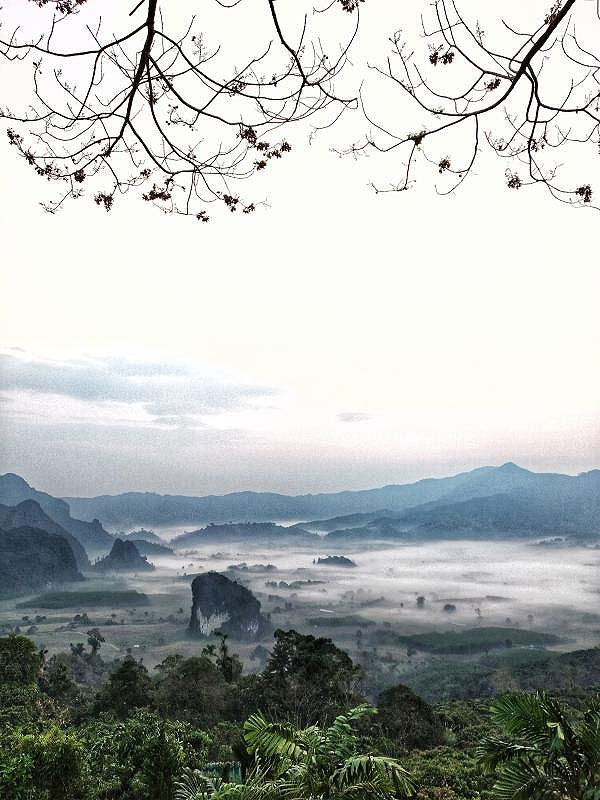 This mesmerising morning vista can be enjoyed from Phu Langka Ban Suan Resort (facebook/PhulangkaResort). The modest property in Pong district is named after a nearby mountain which cannot be seen from the resort whose lookout points are open to the public, free of charge. In order to take this photo, I had to leave my hotel in Chiang Kham early in the morning. Next time, I would rather stay at this resort so I can appreciate the beautiful sight as soon as I get out of bed. If you have the same idea, make sure you book one of the two bungalows with a veranda overlooking the sea of mist. As for Phu Langka itself, over two decades ago I hiked to the top. Trust me, the view from up there is no match for what you see in this picture, which in turn, doesn't do justice to the actual scenery. Also in Pong is the Pangkha Royal Project Development Centre, which is famous for its fruit and decorative plants (tel.054-401-023 and 088-410-9089). 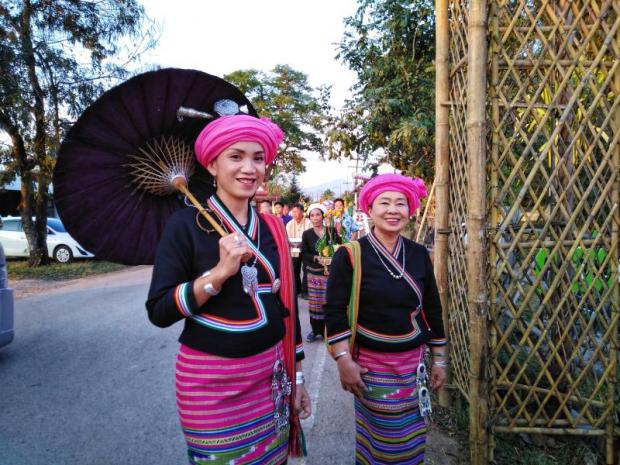 Chiang Kham is home to several temples. Among those worth visiting is Wat Phra Nang Din, where the principal Buddha image is situated on the ground instead of on an elaborate platform. It is said that in the past, villagers built a raised base for the statue, but every time they tried to lift the image, a bolt of lightning struck. They saw this as a sign that the Buddha wanted to stay on the ground so they left it that way. Other temples worth checking out are the Shan-style Wat Nantaram, the Thai Lue-style Wat Saen Muang Ma, which also houses a Thai Lue museum, and Wat Yuan, which also has a Thai Lue cultural centre. 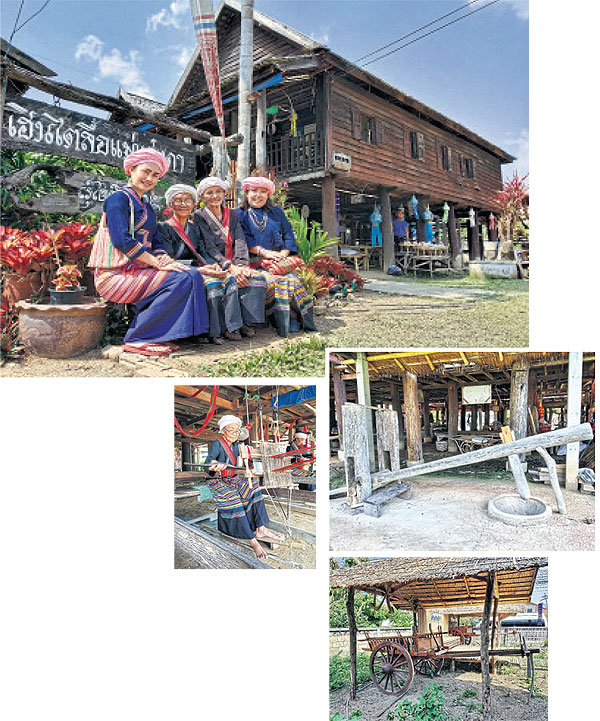 The Thai Lue (also called Tai Lue) originally came from what is now Xishuangbanna in China to settle in Siam. There were a number of migrations, starting during the reign of King Rama I and continuing to that of King Rama V. Ancestors of the Thai Lue in Chiang Kham migrated to the Kingdom in 1870. They were later relocated to what is now Chiang Muan district before finally making Chiang Kham their permanent home. This wooden house belonging to 90-year-old Mae Saengda (second from left in the main picture) was built when she was 17. It is one of the few Thai Lue style structures that have been kept in their original condition. The area beneath the raised floor of the house now serves as a weaving centre, where villagers weave traditional cotton cloth. Maintaining old houses such as this can be expensive, but Mae Saengda and her fellow weavers are determined to do their best to preserve it and their community's heritage for future generations. 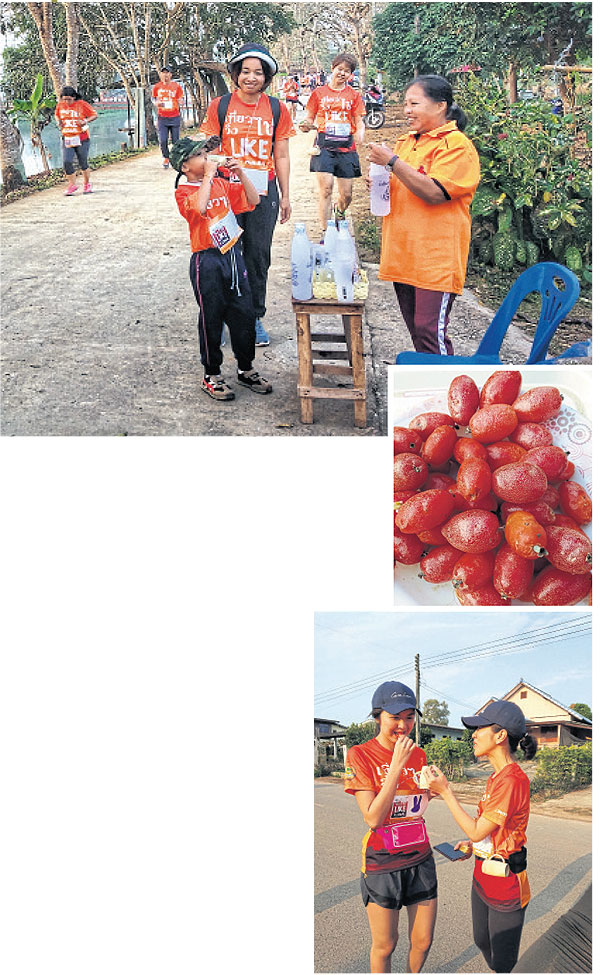 Recently, the people of Chiang Kham and Phu Sang welcomed 200 or so runners from around the country for an event called Travel And Run Like A Local. Unlike other similar events which focus on racing, this one — organised by Vacaylista, the Tourism Authority of Thailand and local communities — encouraged participants to take their time and take in the beauty along the way. From the starting point in Chiang Kham to the finish line at Phu Sang Waterfall, the runners passed through a number of places which gave them the chance to learn something about the local way of life. 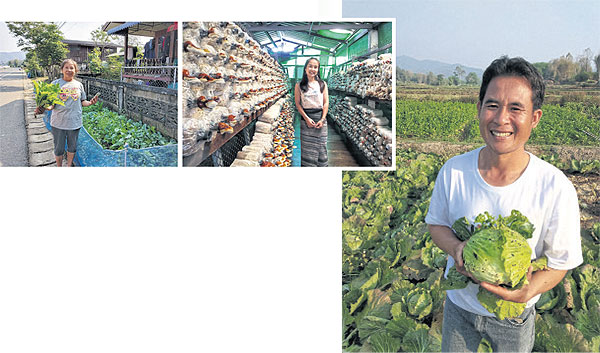 It's not uncommon to see plants growing in front of houses. But in Phu Sang, the practice is a little different. Instead of growing decorative plants, many families use the space between their houses and the road for growing cabbages and other vegetables. Of course, there are also plenty of proper farms as well. Some, like Meesuk Farm (tel.081-179-6341) and Sukjai Mushroom farm (tel.090-217-8296 and 088-443-9445) refrain from using chemicals and follow the sufficiency economy philosophy of King Bhumibol Adulyadej. A visit to these two places is highly recommended. Call in advance, so they know to expect you.

With the use of a remote control, this two-storey house in Phu Sang can rotate. This allows owner Siwakorn Phakaew and his family to enjoy different views, breezes or sunlight angles however and whenever they wish. Since its 2.5 million baht construction was completed in November 2016, the house has become a local attraction. Call 081-961-4996 or visit bit.ly/2YspQjG for more information and video clips. 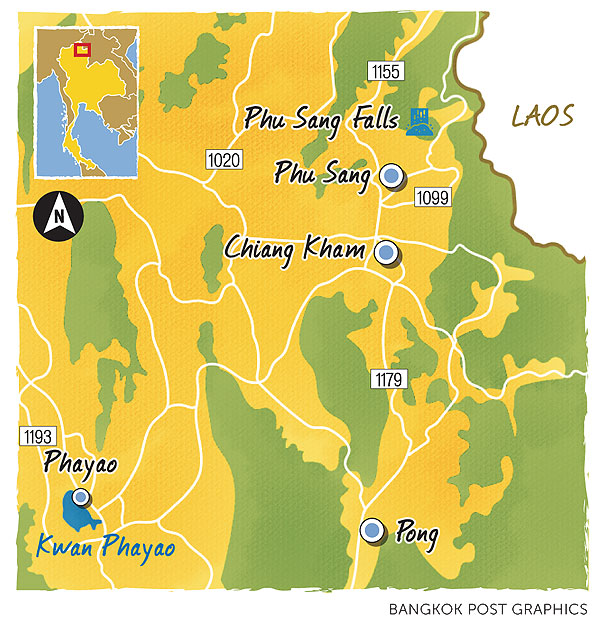