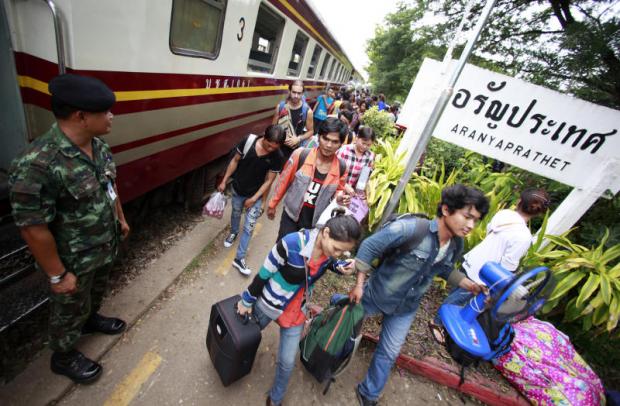 The railway service linking Thailand and Cambodia is expected to launch soon, according to Transport Minister Arkhom Termpittayapaisith.

The State Railway of Thailand spent about 19 million baht last year building a border train station in Ban Khlong Luek in Sa Kaeo's Aranyaprathet district. It also extended the railway network for 5.6km from the town of Aranyaprathet to the border station. The train service is expected to connect to the railway in Poipet town in the Banteay Meanchey province of Cambodia.

The rail network between the two countries was originally established in 1942, but the service was suspended in the 1970s due to the civil war in Cambodia. The Cambodian government renovated and opened the Poipet train station last year. The station is about 850m from the border.

The service is expected to generate more income for both border towns and will facilitate logistics and tourism, as travellers can take a slow train ride from Bangkok to Phnom Penh.

The FlyGRN website has been launched as an alternative flight-search engine that offers a carbon-emissions offsetting service. The target is environmentally conscious travellers.

FlyGRN founder Jelle Bekirovic initiated the service because of his concern about the environment with growing global carbon-dioxide emissions, especially due to aviation.

Passengers will know the total CO2 emission of their flights. They can compare prices and flights of the website's airline partners. When passengers book and pay for their ticket, FlyGRN will receive a fee. It will use a portion of the commission to support carbon-offsetting projects. Today it supports a solar panel project in India that displaces fossil fuels.

According to the airline, the Chiang Mai-Krabi service is one of its strategic moves to use Chiang Mai as a hub. Moreover, the service will help promote cross-region tourism.

The route is serviced by Airbus A319 aircraft with 144 seats. The service is available every Sunday, Tuesday and Thursday and will expand to a daily flight from April 30.

The outbound flight departs Chiang Mai at 12pm and will arrive at Krabi airport at 1.55pm.

However, the airline does not provide any direct return flight from Krabi to Bangkok. Passengers need to have one stop at Suvarnabhumi.

- AirAsia will launch a direct flight linking Phuket and Phnom Penh in Cambodia. The service will start on June 1 and will be available every Monday, Tuesday, Friday and Saturday.

The launch is the response to the steadily growing CLMV market, a major source of tourism for Thailand, according to the airline.

The 195-room property is about 2km from Patong Beach and 40km from Phuket International Airport.

Holding a backyard-party theme, the event will feature arts & crafts products like handmade soaps, jewellery, leather goods and Thai fabric products. There will be food, music, workshops and family activities including face painting and balloon art.

The party will be held at the Surawongse Rooftop from 5–10pm.