Loudspeakers blared luk thung music. The continuous beats of bass and drum vibrated the ground. People danced with the tune while elephants walked majestically in front of the parade, carrying monks-to-be on its back. 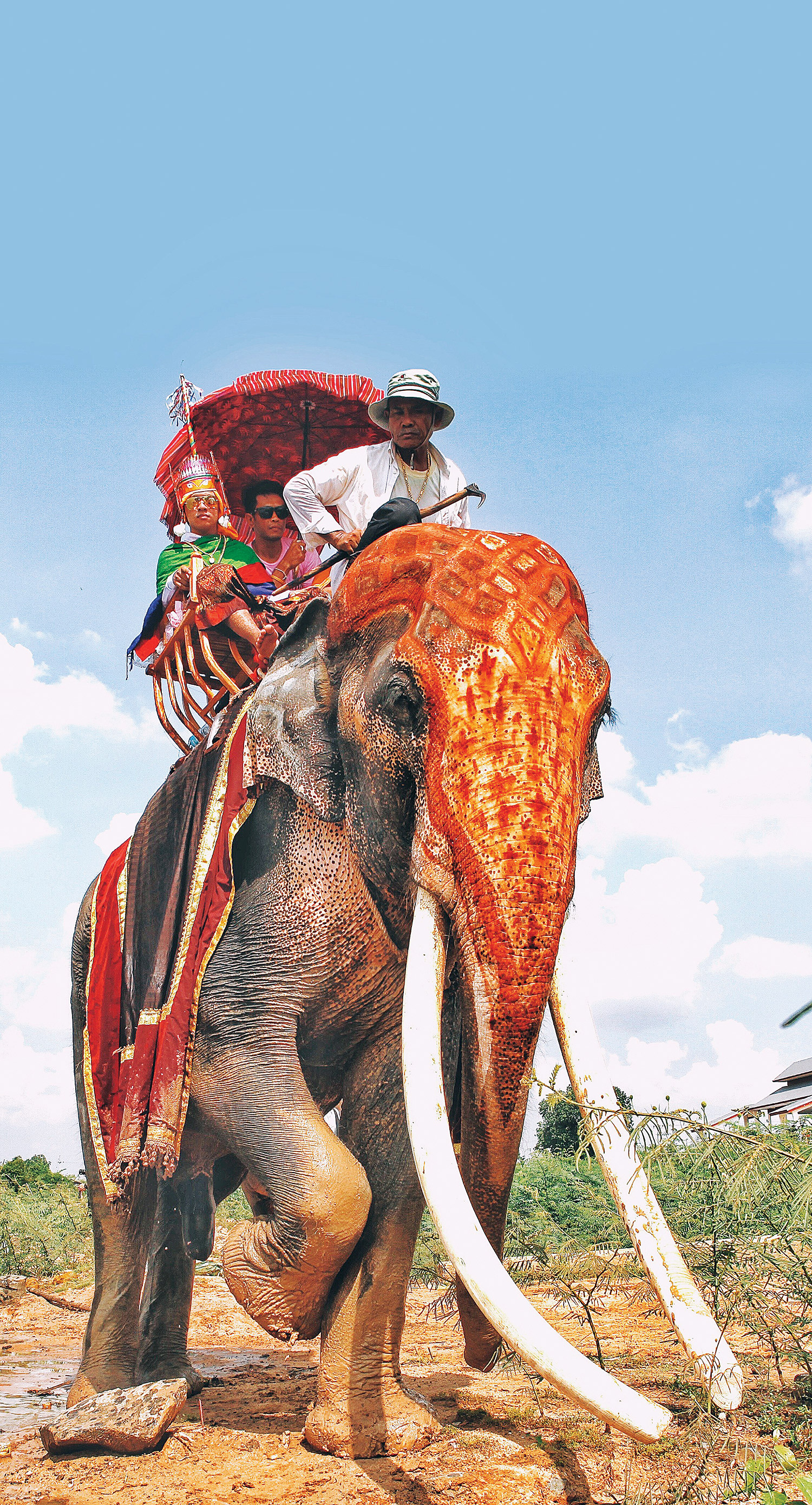 Taking place yearly during the Full Moon of May, the ceremony this year was organised in the middle of last month. About 14 Kui men and one Japanese guy who loved the culture of the ethnic group joined the mass ordination ceremony.

"The monk ordination is great merit for me and my parents. I am happy and also excited," said monk-to-be Wichet Kitsamran, 21. He rode an elephant raised by his family.

"The elephant is like my family member. I also want him to share my great merit," he added.

Kui were renowned as experts in capturing and taming wild elephants. They migrated from Laos to Thailand in the Ayutthaya period. 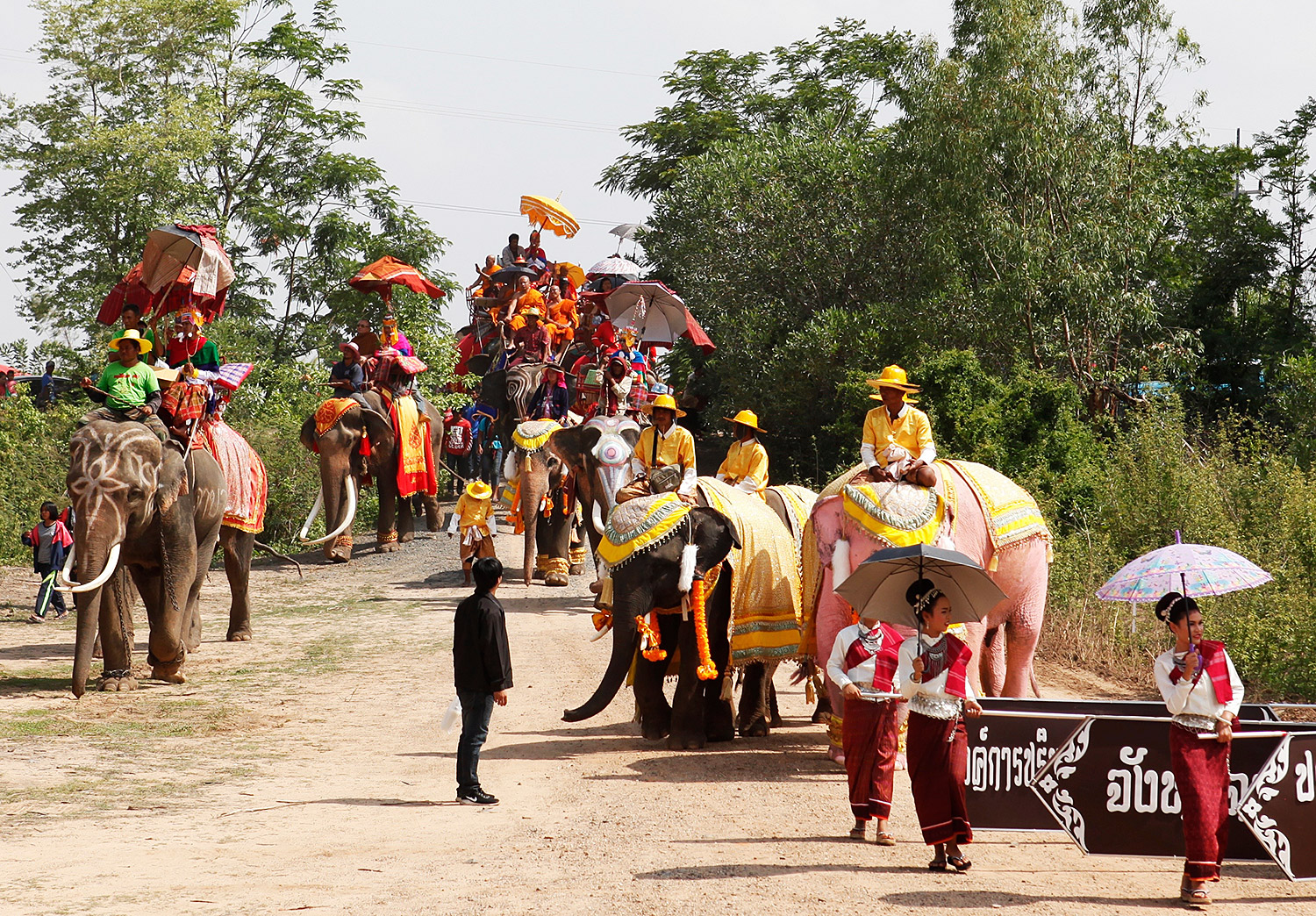 The ceremony this year was hosted by the Provincial Administrative Organisation of Surin and presided over by the Surin governor. Kui men in traditional dress a day before being ordained as monks.

Historical records show that during the early Rattanakosin era, leaders from the different Kui communities presented Siamese kings with the white elephants they had caught. Since 1960, it has been illegal to catch wild elephants.

Kui people changed from being elephant catchers to elephant raisers. Although most of them nowadays are farmers, they still raise elephants next to their stilt houses.

Two days before the ordination, the monks-to-be joined a head-shaving ceremony in Wat Chaeng Sawang, the centre of activities for the mass ordination. The highlight of the event was the second day, when the elephant parade took place.

During the event, each monk-to-be had to wear make-up. Lipstick, eyeshadow and mascara were used to colour their cheeks in pink, eyelids in green and lips in bright red. Wichet put on a long-sleeved white shirt and red sarong. His mother put three pieces of silk woven clothes in pink, green and dark blue over his chest and shoulders, topped with gold necklaces. He also wore a headdress like a crown with a high pointing pin in the middle called krachom nak which looks like a Thai theatrical crown. 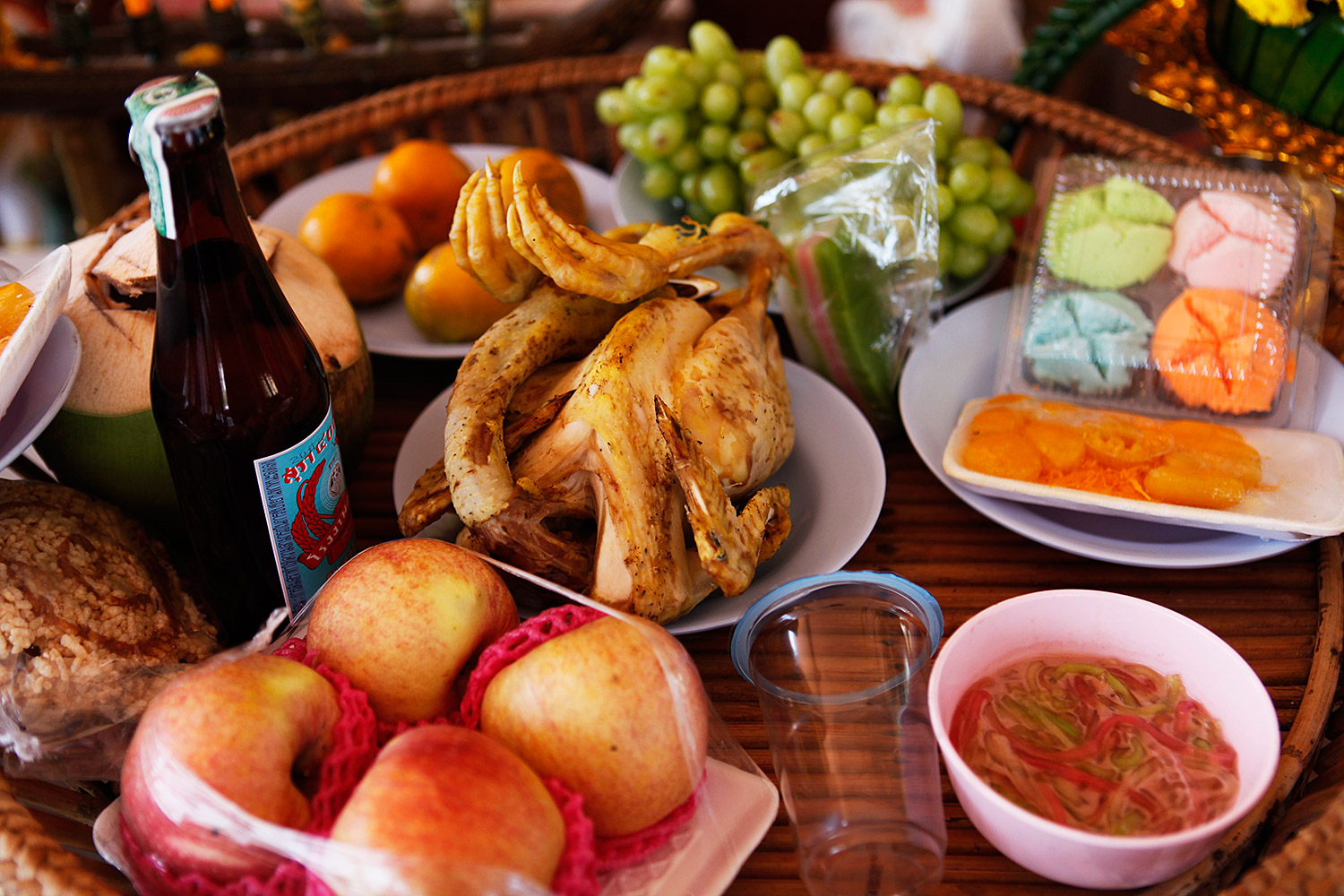 Offerings for the village guardians. 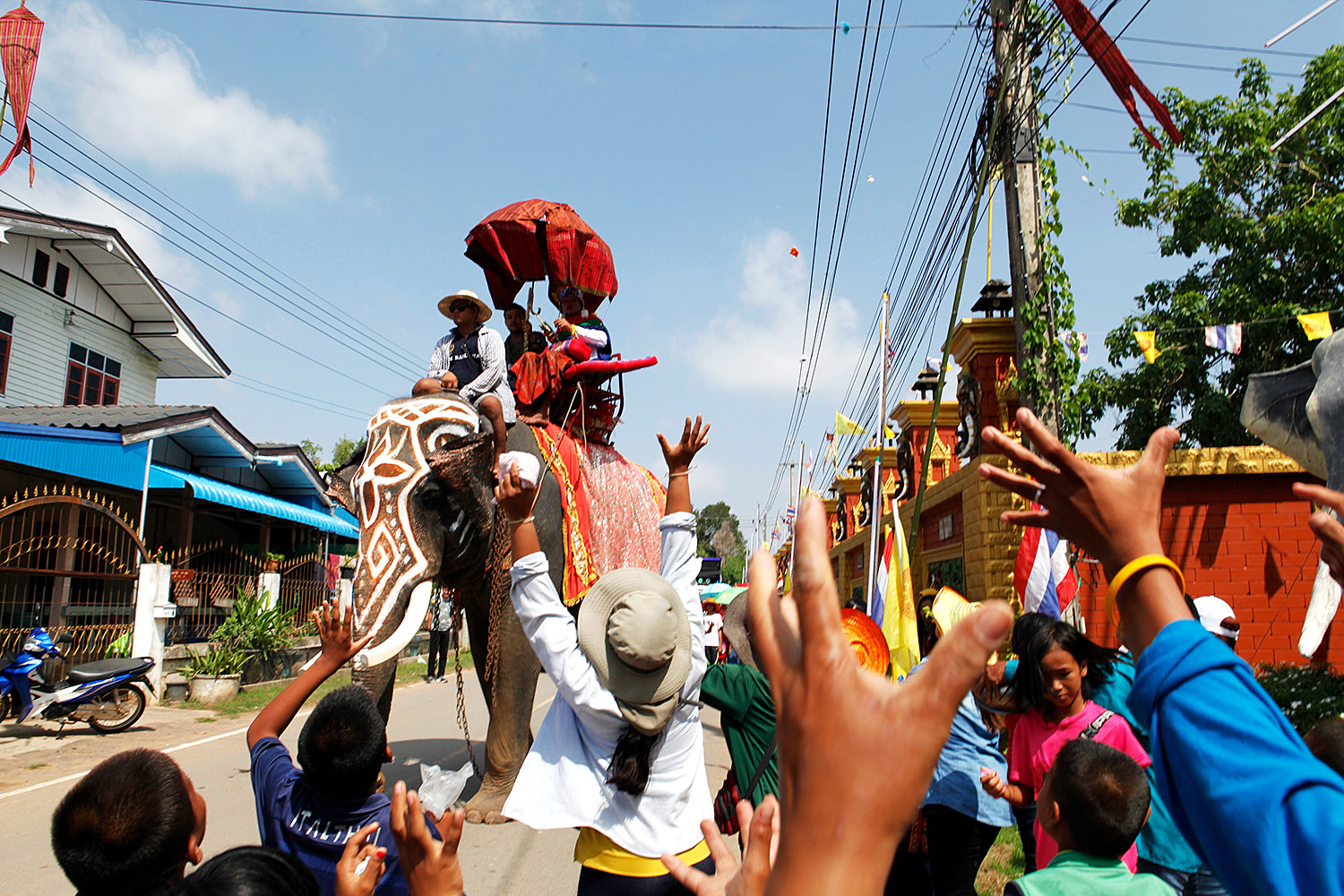 A monk-to-be throws coins into the crowd.

"It is our tradition to dress him like an angel so he will be reborn in a simple life of monkhood," said his mother, Chonthicha, 48.

"I am overjoyed to see my son as a monk. It is our belief that every son must be in the monkhood after they turn 20 years old. He is my second son and we will have another ceremony like this again in the next five years when my youngest son reaches 20," she said.

While Wichet was getting dressed in his house, the elephant was also being painted on its face and body with colour chalk. When it was about 10am, Wichet and the elephant were ready for the parade.

He lit incense sticks to pay respect to his ancestors at the family's spirit house in the front yard. It was his big day. He wanted to tell his forebears and asked for a safe elephant ride. He also waied the elephant before mounting it. The air thumped with luk thung music which was played as loud as possible. It was a signal to call for neighbours, relatives and friends of the family to join the parade. 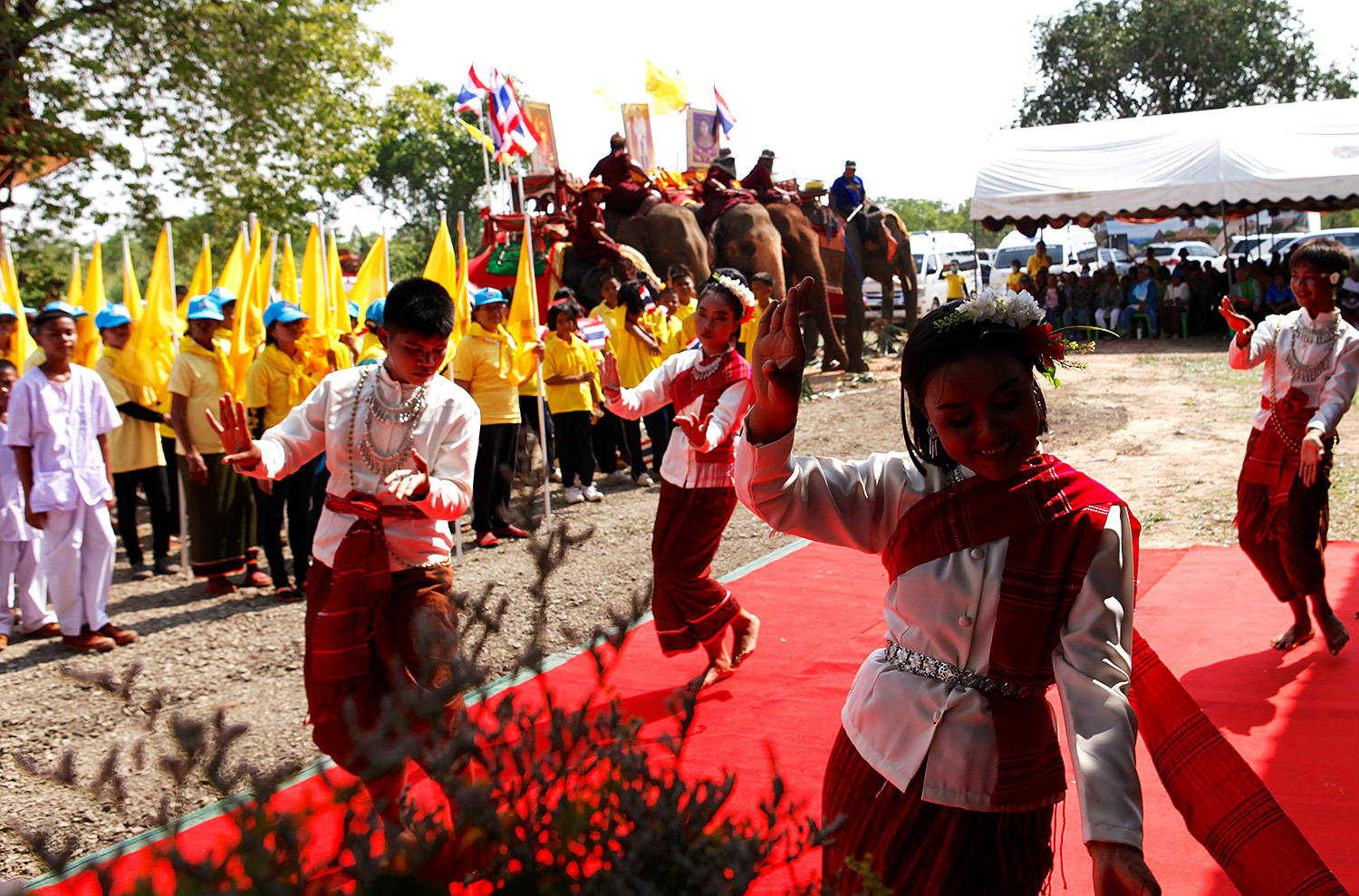 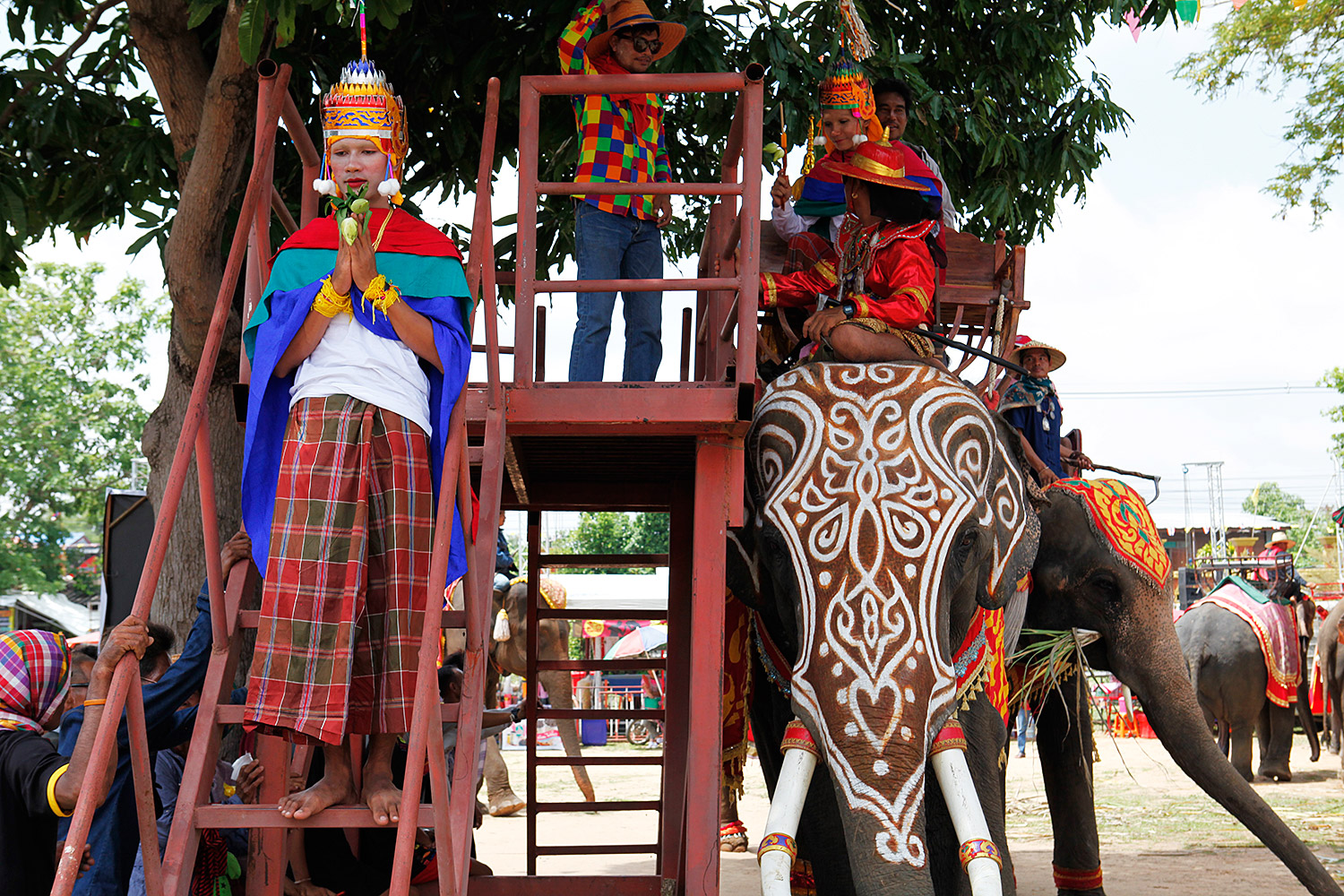 Monks-to-be dismount the elephant by using a platform in the temple. They will have lunch in the ordination hall before joining the parade.

Wichet stepped on the elephant's front leg while holding the hand of a mahout to push himself onto a howdah. His relative handed him a large silver bowl filled with 1 baht coins. Each coin was wrapped with colourful ribbon. The parade started from his house to the temple. The distance was not far, but it took about an hour because it was occasionally stopped for the monk-to-be to throw the coin packages out to onlookers and to those who joined the procession. It was a fun time, especially for children who scrummed down the street for the coins.

When the elephant reached Wat Chaeng Sawang, other elephants had already arrived with other monks-to-be. Wichet took his place in the ordination hall. Soon his parents would serve him lunch. About 20 elephants ate their food under shade in the temple. During this time, those who want to take pictures with elephants paid mahouts for a beautiful shot. They may buy banana bunches to feed the elephants. The temple also organised a fair and offered free food, drink and ice cream for every participant.

About 2.30pm, all monks-to-be returned to their elephants. The elephants started to form a line. The parade was led by dancers and followed by groups of students, elephants carrying monks and the elephants with monks-to-be, while their parents holding offerings walked along the elephants of their sons. They walked for 2.6km, from the temple to Wang Thalu, a river bank where the Mun and Chi rivers meet. 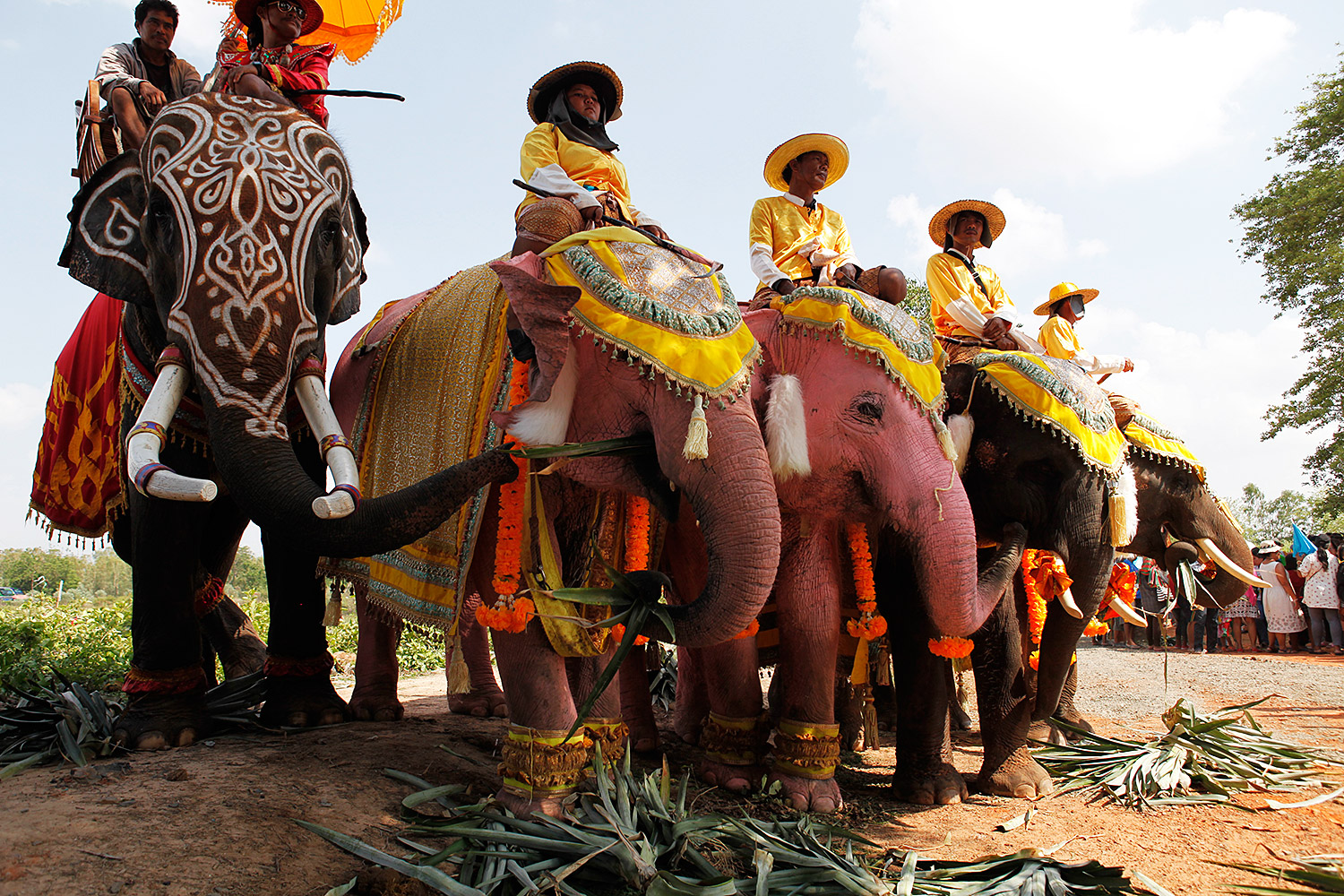 Young elephants are painted in pink to add colour to the ceremony. 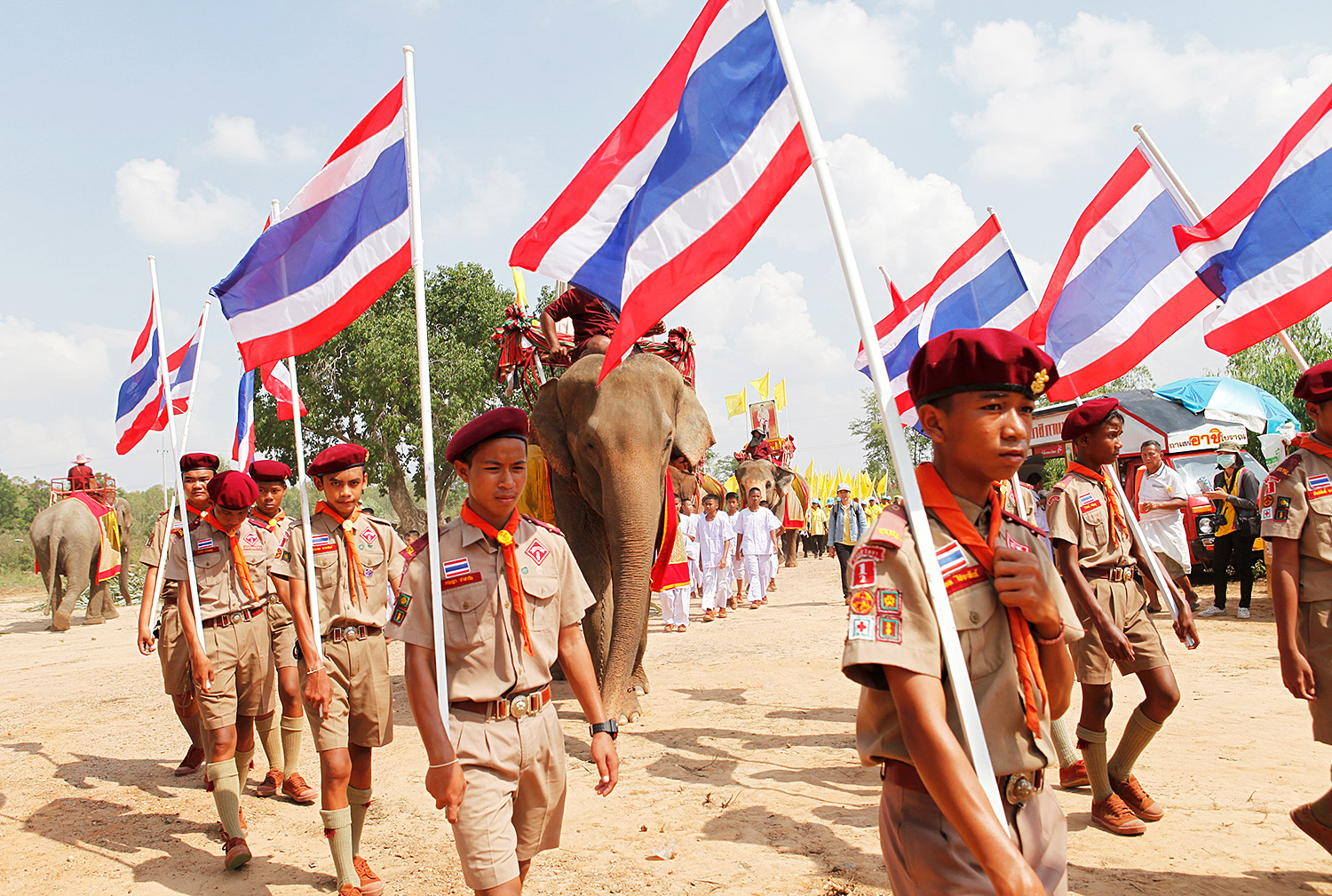 "This is the place where our ancestors held the monk-ordination ceremony in the past, which was long before the temple had the ordination hall. When I was young, I was ordained here. We call this area Don Buat," recalled Ma Sabmak, 78, who is known as mo chang, or an elephant catcher.

As a result, it was the tradition that the monks-to-be would ride elephants from the temple to Don Buat or Wang Thalu before being ordained in the temple. The area also houses San Pu Ta, a small wooden shrine of the guardian spirits of the village.

"Whenever we have a ceremony, we must inform our ancestors. For the Buat Nak Chang ceremony, we ask for a safe elephant ride for all participants," said the elephant catcher.

When the elephants arrived at Wang Thalu, they went directly to the Chi River and stayed in the river for a little while to cool themselves down. After they went up to the river bank, all monks-to-be got down from the back of the elephants and took their seats inside a newly built hall next to the shrine.

The ceremony was opened by the Surin governor. Students hosted traditional performances. Ma Submak and another elephant catcher, Boonma Saendee, 91, led the prayer ceremony in the Kui language while the parents put their offerings with food and drinks outside the shrine.

After the ritual finished, the monks-to-be rode the elephants back to the temple. The ceremony ended the next morning in the temple, where the 15 participants were ordained as monks and wore monastic robes.

"I believe the ritual brings fame and good fortune to my families and those who join the ceremony," said Narukit Salangam, 24, who had intended for three months to be a monk. "I am happy to take part in our tradition and keep it alive." 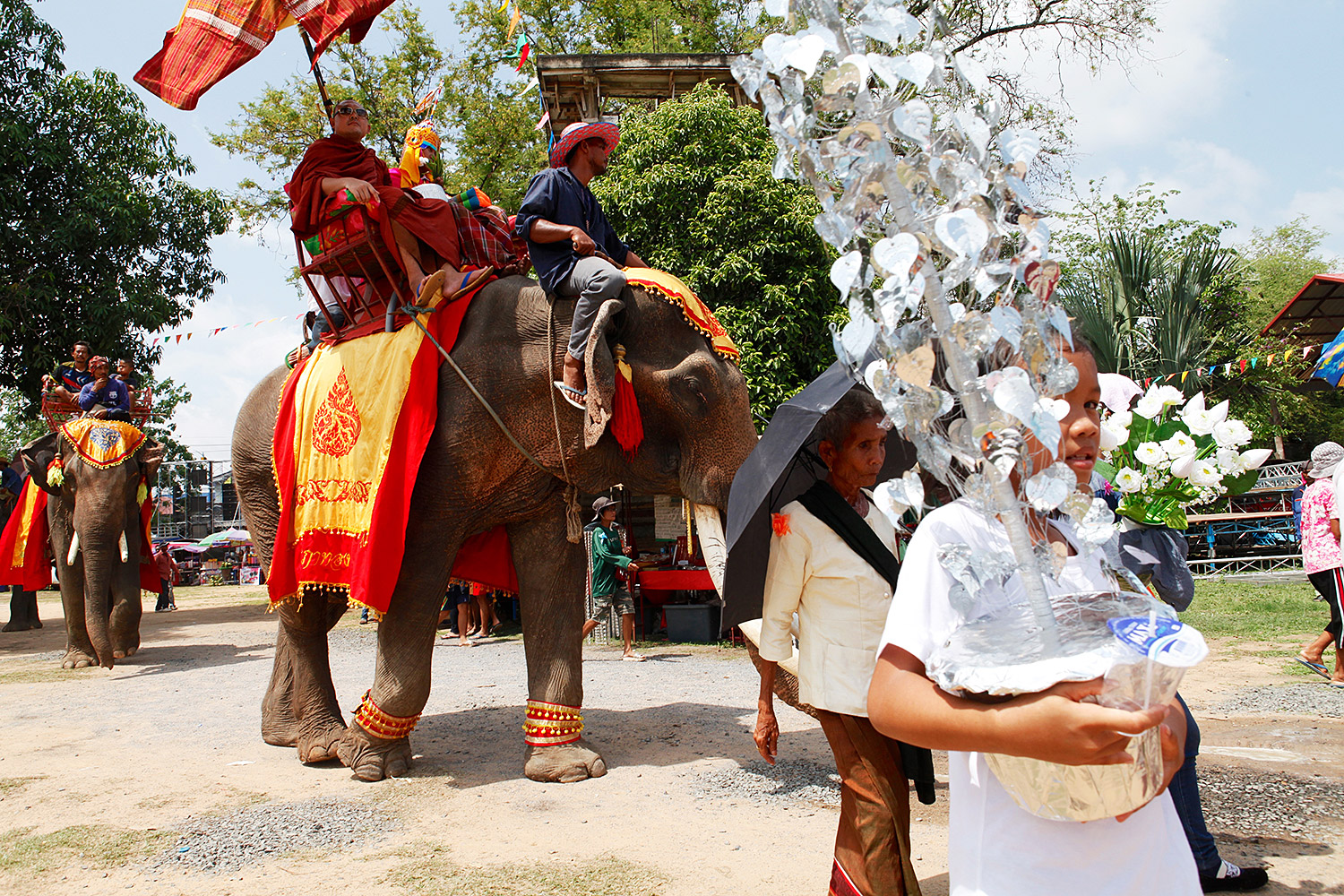 The parade sets off from grounds of Wat Chaeng Sawang.