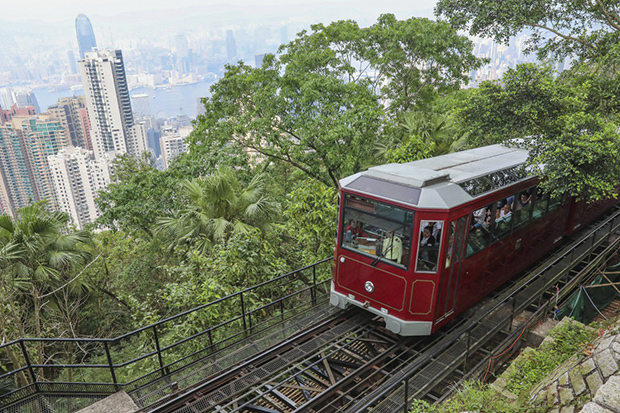 The revamp of Hong Kong’s century-old Peak Tram is set to boost passenger numbers by double-digit growth in the first year and meet modern needs without changing the classic style of its iconic carriages.

May Tsang Ying-mei, general manager at the Peak Tramways Company, said the forecast was based on the novelty effect following a HK$684 million (2.7 billion baht) facelift. She also expected the figure to climb at an average annual rate of 2% in the following years.

“Our target is to reopen it in early 2021. We hope to do it before Lunar New Year,” she said in an interview with the South China Morning Post last week.

Over the past decade, the operator recorded an average annual ridership of about 6 million. Hong Kong on the whole expects to welcome a record 66.4 million tourists this year, up from 65.1 million in 2018.

Opened in 1888, the tram service catered to British businessmen and Chinese workers. The first two seats in the initial 30-seater doorless compartment were once reserved for the governor.

In its first year of operation, the tram carried 150,000 passengers, equivalent to 80% of Hong Kong’s population at the time.

Tsang said that, to keep up with the times, a Swiss firm and designers were working on a fresh look for the sixth-edition tram cars that could carry 210 passengers each, compared with a current capacity of 120 riders.

The new versions are expected to serve more than 600 extra passengers per hour during peak periods.

“We want to keep the classic characteristics of the trams and also give a better experience to tourists, so they can have a more comfortable ride,” Tsang said.

She added that the waiting time would also be reduced from 90 minutes to about 17 on weekends.

Another major change centred on a fountain at the lower terminus, which would be replaced by an art piece that Tsang hoped would become a landmark. She added the firm was in talks with five foreign artists over proposals for it.

Hong Kong's century-old Peak Tram is getting an US$87 million facelift https://t.co/qU2nnAk5u7 pic.twitter.com/4iFq4WITnK

Tsang said the ongoing makeover would also introduce a new haulage system and track rails. But she said the company had yet to decide whether to raise fares after the completion of the privately funded project.

According to Tsang, time management is one of the biggest challenges as the tram service suspension is planned for just seven to eight months, spanning two phases. The first stage will begin on April 23 and last for up to three months.

Tsang said halting the service only once would be cheaper, but the suspension could stretch up to 15 months.

“Our target now is quite aggressive as we aim to shorten the service disruption as much as possible.”

The last overhaul of the service took place in 1989. Over the years, long waiting times have been cited as a major headache for tourists, with some being stuck in queues for up to two hours.

Shirleen Oh Szu Ling, 47, a Singaporean who lives in New Zealand and visited Hong Kong for the first time around the Lunar New Year holiday in February, said she was put off by the long queue.

“I thought I could avoid the crowd and got to the terminus at 8.30am,” the marketing professional said. “But the queue was so long that I had to wait for at least an hour before I could buy a ticket. I don’t want to waste that hour, so I left for other places.”

Tourism lawmaker Yiu Si-wing said he expected shorter waiting times after the revamp, and a larger waiting area would also give the attraction a boost. He predicted individual visitor numbers -- those not under tour groups -- to jump by as much as 20%.

According to Peak Tramways, 90% of passengers are tourists, of whom more than 65% are first-time visitors to the ride. Among the non-local passengers, mainlanders, short-haul market visitors and long-haul market travellers made up equal portions.

“If the attraction can secure good word of mouth, the number of customers will grow even further,” Yiu said.